jenspeterhansenPosted on 3. januar 2017 Udgivet i Publikationer No Comments

Changing behavior amongst motorists and cyclists by measuring passing distances

Perception is reality! Many everyday cyclist – especially elderly, women and children – often complains that passing cars is almost hitting them. Whether this perception is true or not, it has to be dealt with, as a feeling of being unsafe will keep people off their bikes.

Therefore, in Randers, the local branch of Danish Cyclists’ Federation will run a campaign from November 2016 to May 2017 to raise awareness about the importance of keeping a safe distance when overtaking a cyclist.

The aim of the campaign, which are funded by TrygFonden, is two-fold

Our current hypothesis is, that most passing’s is done with a safe clearance between vehicle and cyclist and that we only will experience few close passing’s. By being able to document this, we will be able to calm nervous riders and we will via public debates, raise awareness among drivers about the importance of sufficient distance.

To get data about passing distances, we will use two sets of C3FT, which is a bicycle-mounted electronic system designed for the purpose of detecting, capturing, and displaying – on video – the proximity of passing vehicles.

Our plan is to collect data using different riders, clothing and bicycles and do this on different kind of roads in autumn, winter, spring and early summer. All results will be available for presentation at Velo-City 2017. 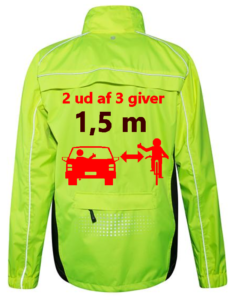